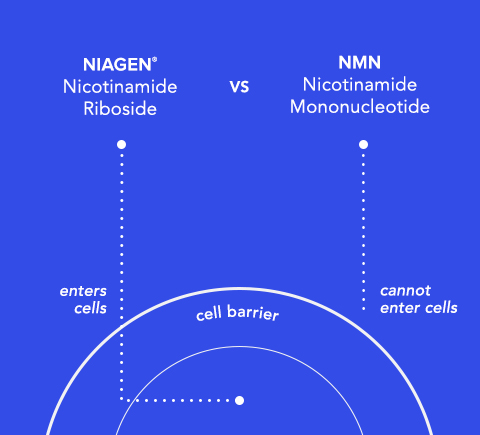 In recent years, NAD+ continues to be at the forefront of research in aging, health, and disease.

However, the popularity of NAD+ research also opened the door for misinformation about NAD+ and NAD+ precursors.

So, which one should you trust? The evidence overwhelmingly favors Niagen®, but here’s a breakdown to adequately assess these NAD+ precursors in detail.

According to Clinicaltrials.gov, a government-sponsored database of human clinical studies, as well as the World Health Organization (WHO) International Clinical Trials Registry, there are more than 45 ongoing studies involving Niagen® vs. more than 15 for NMN. That’s a near 3:1 ratio.

These numbers show the growing amount of research behind Niagen®, investigating the various health benefits of raising NAD+ levels in humans.

Niagen® has been the subject of 13 human clinical studies, providing a broader and far more convincing foundation of scientific evidence as the preferred NAD+ booster.

In contrast, NMN has been the subject of only three published, peer-reviewed clinical studies.

The first study, published in the Endocrine Journal in 2020, failed to assess the effect of NMN supplementation on NAD+ levels.

Researchers conducted a small, non-blinded, uncontrolled (no placebo) trial consisting of 10 healthy Japanese male subjects aged 40-60. The study administered NMN over the course of three visits, each spaced more than a week apart. Subjects received a single 100, 250, or 500mg dose of NMN.

The study concluded that NMN supplementation shows no serious adverse effects and tolerability in moderately high doses. Still, it did not assess the effect on NAD+ levels or the safety of daily NMN supplementation over any significant period of time.

However, a major limitation of this study lies in the researchers’ failure to randomize the participants properly.

The third study, published in the Journal of the International Society of Sports Nutrition failed to evaluate the effect of NMN supplementation on NAD+ levels, but the study showed a significant increase in aerobic capacity during exercise training for healthy amateur runners.

But this NMN study did not show any alterations of the subjects’ body mass or body composition. In contrast, a study published in The American Journal of Clinical Nutrition shows NR increases body fat-free mass and improves body composition in healthy overweight or obese men and women.

Overall, to date, a collection of human clinical studies comprehensively shows that Niagen® effectively and safely increases NAD+ levels. The continued use of Niagen® in these trials further reflect the trust that the precursor holds in the scientific community. Overwhelmingly, the body of research favors Niagen® as the best choice for a NAD+ precursor.

A study published in Nature Communications in 2016 reports that single oral doses of 100mg, 300mg, and 1000mg of Niagen® can safely elevate NAD+ levels. Researchers investigated the effects of NR supplementation in 12 healthy men and women, establishing both its safety and efficacy as an NAD+ precursor in humans.

A study published in Nature Communications in 2018 shows Niagen® supplementation is well-tolerated and effectively elevates NAD+ in a group of healthy middle-aged and older adults. The subjects were 60 healthy men and women between the ages of 55-79. The study administered a dosage of 500mg twice per day for six weeks in a randomized, placebo-controlled, and crossover designed trial.

A study published in the American Journal of Clinical Nutrition in 2018 concluded that 2000mg of daily Niagen® supplementation over a period of 12 weeks is safe. In addition, the subjects showed an increase in NAD+ metabolites in urine samples.

The researchers administered 1000mg of Niagen® twice daily over a period of 12 weeks in a randomized, placebo-controlled, double-blind, parallel-group designed trial. The subjects consisted of 40 healthy, obese men ranging in ages of 40-70.

A clinical trial published in Scientific Reports in 2019 concludes Niagen® both safely and effectively increases NAD levels in a dose-dependent manner in healthy overweight adults. The study used an 8-week randomized, double-blind, placebo-controlled trial to conduct its evaluation. After two weeks, the study results are as follows:

A study published in The American Journal of Clinical Nutrition in 2020 investigated the effects of Niagen® on metabolic health, muscle metabolism, and mitochondrial function. The study was a randomized, double-blinded, placebo-controlled, crossover trial of 13 healthy overweight and obese adults. Similar to the previous study, NR supplementation significantly increased markers of enhanced NAD+ metabolism in human skeletal muscle.

A study published in Molecular Systems Biology in 2020 investigated the effect of Niagen® in combination with other supplements on liver fat. The study combined NR with L-serine, N-acetyl-L-cysteine, and L-carnitine for their potential benefits for people with higher liver fat content. Mathematical modeling results showed increased fat metabolism, decreased glucose metabolism, and increased synthesis/turnover of NAD+, carnitine, and glutathione.

A study published in The Journal of Physiology investigated the effects of Niagen® supplementation on whole-body metabolism and exercise-induced mitochondrial signaling in skeletal muscle. The study showed increased markers of NAD+ flux, demonstrating the skeletal muscle bioavailability of NR supplementation.

For example, a study published in Nature Communications in 2016 on NMN’s metabolism in mammalian cells concluded NMN cannot directly enter the cell.

Similarly, NAD+ supplementation provides no advantage over nicotinamide riboside because NAD+ is too large and contains multiple phosphate groups. NAD+ must be broken down into individual parts before entering the cell; then, it reforms back into NAD+.

However, a study published in Nature Metabolism in 2019 claimed to have identified a transport protein for NMN in the small intestine of mice. But researchers Mark S. Schmidt & Charles Brenner questioned the validity of this claim, stating there is an absence of evidence for this NMN transporter.

Niagen® bears the NSF Certified for Sport® seal, but no NMN products do.

The NSF Certified for Sport® includes a certification that Tru Niagen® is made to current Good Manufacturing Practice (cGMP) standards, testing to confirm the level of Niagen® in the product is consistent with the amount claimed on the label and absent of over 270 athletic banned substances and harmful contaminants.

On the other hand, the lack of regulatory review of NMN precludes NMN products from bearing the NSF Certified for Sport® seal.

After reviewing the facts, the choice is clear.

Niagen® (nicotinamide riboside) provides a sound basis for confidence. The studies behind it are overwhelmingly positive, and the regulatory acceptances are ironclad.

In contrast, only one study suggests NMN is an effective method for elevating NAD+ levels in humans.

It all comes down to how much you are willing to gamble on a questionable product.

Let’s look at a bird’s-eye view.

We covered a lot in this comparison. And perhaps you’re still mulling it over. Below is a brief summary of our comparison to help you get a better bird’s eye view of both these ingredients. 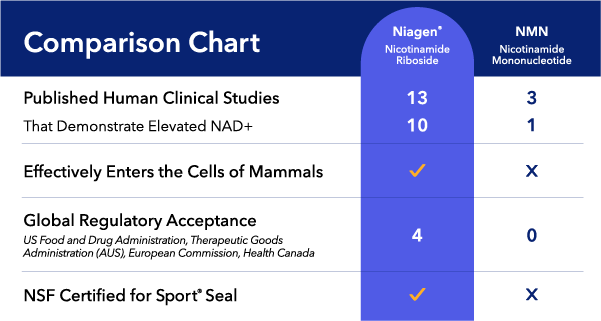